Why Does Louisiana Lead the Nation in Murders? 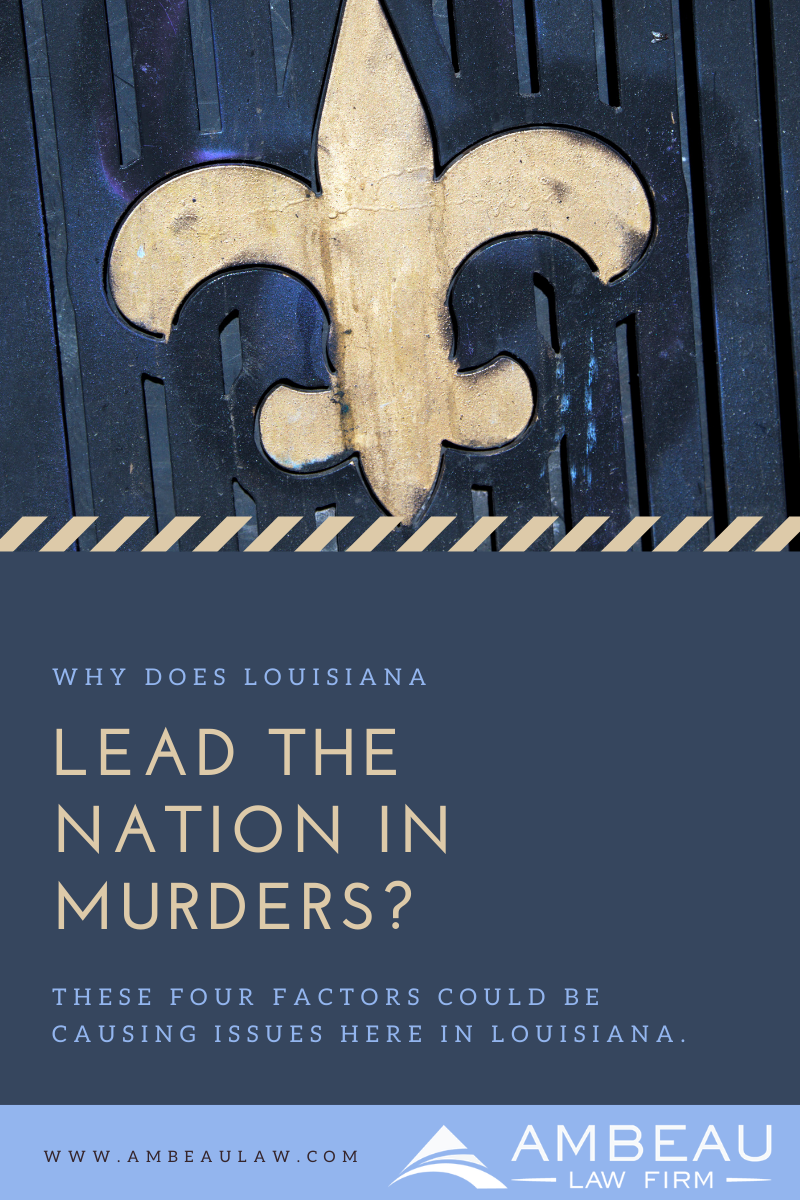 Statistics of Violence in New Orleans and Surrounding Cities

If you are a resident of Louisiana, then you know there is so much to adore about the Pelican State. Filled with sports fanatics, a subtropical climate, delicious Cajun and Creole cuisine, and a lower cost of living than the rest of the country, it is not hard to see why almost 5 million people have chosen Louisiana to be their home.

Sadly, the state we love faces a crisis and experiences some sobering statistics: Louisiana has been reporting the highest murder rate in the country for 31 years. In 2019, the total number of murders in Louisiana came in at 544, which totals out to be 11.7 per 100,000, compared to the U.S. average of 6.6 murders per 100,000.

These statistics have proven to be puzzling, considering that major cities in Louisiana like New Orleans share many similarities with other major cities that do not experience the problem to this degree. Atlanta, for example, has similar geography, population size, and poverty level. Yet, residents of Atlanta have a 1 in 121 chance of becoming a victim of a violent crime, whereas residents of New Orleans have a 1 in 15 chance.

While the statistics in New Orleans are certainly concerning, the violence is not isolated to The Big Easy, as residents fondly nicknamed the city. Statistics in New Orleans are staggering, with 424 murders in 1994 at the height of the city's most dangerous time. During that year, the city's homicide rate was 86 per 100,000, which was the most extreme ever reported by a major U.S. city.

However, even if New Orleans were taken out of the equation, Louisiana would have retained the highest or second highest murder standing for the majority of recent years. Baton Rouge is becoming more dangerous than the average city as well. The city recorded its worst three-year record between 2017 and 2019 and reported more murders than New Orleans in 2019.

Contributing Factors to Violence in Louisiana

It can be difficult to pinpoint the exact cause for the high violence and murder rate in Louisiana, but when studying the issue, theories point to high unemployment, high poverty levels, low quality of education, and high incarceration rates. Let's take a closer look at each issue and discuss how we can move forward to protect the rights and freedoms of the people in the state we love.

In the March 2021 preliminary published in the Louisiana Workforce Commission, the seasonally adjusted unemployment rate was 7.3%. This is higher than the average unemployment rate in the U.S., which sat at 6.1% as of April 2021, according to the U.S. Department of Labor.

Historically, unemployment has been linked with high crime rates, so it comes as no surprise that this has proven true in Louisiana. For example, The Journal of Law & Economics has published a study that shows a 1-5% decline in crime correlated with a 1% decrease in unemployment, which shows that addressing this issue could have a domino effect on addressing violence as well.

When we talk about the poverty levels in a given state, we are referring to the number of individuals who are living at or below income levels that are considered inadequate by the United States Department of Health and Human Services (HHS). The HHS issues poverty guidelines on a basis of household size. The poverty level for a household of four in 2021 is an annual income of $26,500. For larger families to reach the poverty level, it would add $4540 per additional individual, and for smaller families, it would subtract $4540 per individual.

In Louisiana, 19.8% of residents live in poverty, which is the highest rate in the U.S. This is troubling for a variety of reasons, including the fact that those living in poor households at or below the poverty level see more than double the rate of violent victimization as those in high income households.

When measuring the quality of education in an area, one helpful metric to use is the “Chance-for-Success” index. This index is meant to capture the role that education plays at various stages in an individual's life, focusing on state-to-state opportunity differences. Louisiana ranks 49th on the Chance-for-Success index, scoring a 71.1, or a C-minus. In both 4th grade math and 8th grade math, the state ranked 51st, which is worse than all other states.

Some factors that could contribute to this ranking include the fact that nearly a quarter of high school students do not graduate and the education spending has been frozen for most of the past decade. Studies have consistently shown that the age at which individuals drop out of schools in an area has a correlation to violent crime. For example, these findings published by the Centre for Economic Policy Research found that an increase in the “school-leaving” age reduces the arrest rate by 6% for those affected, with larger effects for drug crimes.

According to the U.S. Department of Justice's Bureau of Justice Statistics, there were 680 people in prison in Louisiana for every 100,000 residents in 2020. This means that Louisiana incarcerates more people per capita than any other state in the country.

One could argue that the high levels of crime are what lead to high incarceration rates, but studies show that it seems to be a vicious cycle. Rather than preventing further crime, incarceration can actually increase crime by breaking down the social and family bonds that guide individuals away from crime, removing adults from the home, depriving communities of income, reducing future earning potential, and instilling a resentment towards the legal system. The Vera Institute of Justice has gathered research to demonstrate the fact that higher incarceration rates led to nearly 0% overall reduction in crime.

When we consider the factors contributing to Louisiana's high rates of violent crime, the area where criminal defense attorneys can provide the most help is the high incarceration rates. A skilled criminal defense attorney like Jarrett Ambeau can help clients avoid jail time. In every case we handle, we will do our due diligence to give our clients the best chance of avoiding incarceration. If you are facing criminal charges, you can rest assured that our firm has dealt with cases like yours and has helped produce favorable outcomes for clients in the past. Furthermore, we are committed to doing the same for you, and we believe this commitment will serve to help the people of the state we love.

If you are facing criminal charges, or have a loved one in this situation, The Ambeau Law Firm can help present your case in the best light possible. Give us a call at (225) 230-1181 or contact us online to learn more.

Next Blog: What is the Role of a Public Defender?
Previous Blog: Is it a Crime to Not File Taxes?