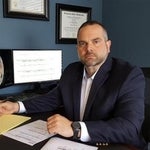 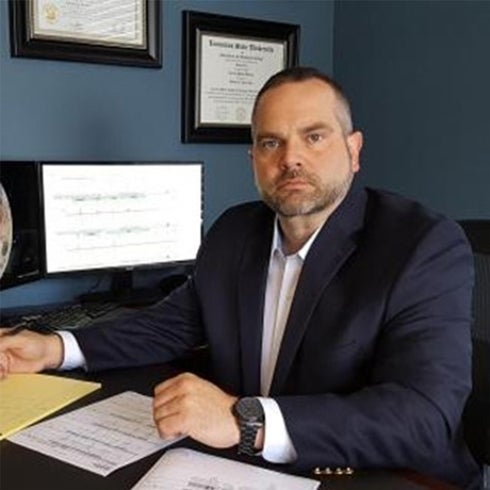 Attorney Jarrett Ambeau is a Criminal Defense Trial Attorney and a court-qualified Expert in Forensic DNA Interpretation. In his 13+ years of practicing criminal defense, he has brought more than 50 felony jury trials to verdict.

Jarrett is committed to fighting for your rights and working diligently to achieve the best outcome possible in your legal matter. I am honored to practice law in the State of Louisiana, the Parishes of Ascension and East Baton Rouge, and the surrounding areas. I will care for your legal matter as though it were my own. I understand that you worked hard to earn the fees paid to my office – I will give you a diligent and honorable effort in return.

Born and raised in Louisiana, Jarrett spent significant time in Tennessee and Georgia in the 90's but returned home to go to school and have lived here since 1998.

Jarrett is married to Mindy Ambeau and the father of six amazing children.

Jarrett earned his undergraduate degree in Philosophy from Thomas Edison State College in New Jersey. He completed his undergraduate studies while deployed to Kuwait/Iraq in 2004 with the United State Military.  Before deployment, he studied at Louisiana State University for 3 ½ years. His undergraduate thesis at LSU focused on the ethics of Immanuel Kant and the formal logic analysis of his formulations of the moral law from his book ‘Groundwork of the Metaphysics of Morals'.

Upon return from Iraq, Jarrett graduated from the Paul M. Hebert Law Center at Louisiana State University in the spring of 2008. In law school, he was a two-time finalist in the Ira S. Flory Moot Court competition and a member of the 2007-2008 Moot Court Board.

In the Spring of 2020, Jarrett graduated from the University of Florida with a Masters's Degree in Forensic DNA and Serology.

Jarrett joined the U.S. Military in October of 2001, 40 days after the terrorist attacks of September 11, 2001, believing it was his duty to defend and serve his country. He was assigned to the 22nd LSO Trial Defense Service, a criminal defense arm of the JAG Corps, in December of 2003 to function as a 27D, paralegal.

In May of 2004, he volunteered for deployment to Iraq. He was sent to Kuwait and served as the NCOIC of the Kuwait Trial Defense Service office. The attorney for whom he worked was assigned to one of the Abu Ghraib soldiers, and the team functioned as her defense team for the duration of their deployment. Jarrett spent significant time traveling to Iraq to support other US Army soldiers as legal defense. During his deployment, they had 5 General Courts-Martial, 400 Article 15 proceedings and non-judicial punishment in the UCMJ. He was released from deployment in January 2005 and returned home.

He remained a member of the 22nd LSO, Trial Defense Service, Team 15, in New Orleans, LA until his retirement from the US Army in Oct of 2017.