Who is "Innocent Until Proven Guilty" anymore? 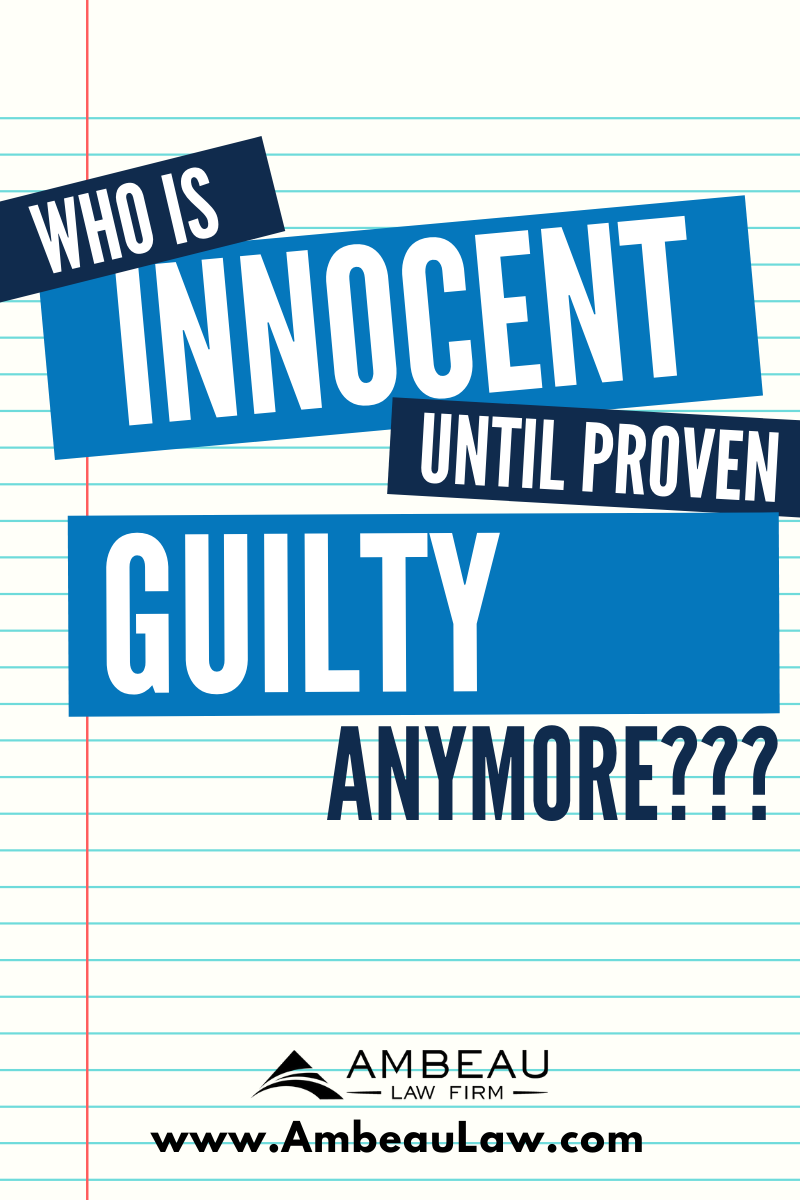 Step Into The Shoes

Before getting into the deep thoughts in this blog, I want to present to you a circumstance. Put yourself into the shoes of this story, and then let's see how you feel.

You are in your home, minding your own business, when a law officer arrives at your door. The officer has an arrest warrant for your partner, with an accusation that they have participated in indecent behavior with a juvenile. This juvenile is one of their children. Deep in your heart, you know there is no way this behavior occurred, and your partner is an upstanding citizen who would never participate in such terrible behavior, especially with their own family. Five hours later, the local news posts a picture of your partner on social media, writing about where they live, where they work, and what the allegations against them. The comments blow up, right? Social media comments include:

"Sicko"
"Lock them up forever"
"That was my old neighbor, I knew there was something gross about them."
"Throw the book at them"
"Burn them alive"

What the social media jurors didn't know is that you and your partner are engaged in a custody battle with their ex, and it involved the children. What they didn't realize was that the ex was utilizing this accusation to try to take the children away from you and your partner. What better way to ruin your and your partner's life, right? You and your partner have to spend a lot of money on a criminal defense attorney like us. You have to fight the charges, and the restraining and protective orders, you could possibly not be allowed around your children, and the court of public opinion has decided by only reading a local news story that you, for staying and defending them, are no better than the dirt on their shoe as well.

Let's fast forward - You won your case. You have spent thousands and thousands of dollars to prove the accusation false. You now have to fight to see your child in family court. Your partner lost their job because no one wanted to employ a sex offender (even if it was alleged), and you have had numerous threats to you via mail and social media. In a court of law, your partner is proven innocent. But in the court of your community, social media, and sometimes even family and friends, the telephone whispers will always continue, "Well did you know they were accused of touching their kids." When you're out at the local Friday night baseball game... the whispers continue.

But what happens to the accuser who insists on ruining the other person's life? Nothing right? Does anyone whisper to their neighbor, "Oh did you know they accused their ex of touching their kids?"

It's a modern-day Salem Witch trial...

Why have our lives become this?

We see so often, with many of our clients, that they not only are accused of something terrible that they have not done, but then in blogs, Facebook groups, newspapers, and even at the little league fields, they will always be known for the allegations hurled at them. Our belief in the justice system of "Innocent before Proven Guilty" stands for such situations. And it's not just situations with sex crimes. It's all types of crimes! Many people rightfully acting in self-defense are accused of 2nd-degree battery, attempted murder, and even second-degree murder.

"When one has been accused of a crime or wrongdoing, it plants a type of stigma on that person. People view them differently, which subsequently causes them to be treated differently. Their lives are forever changed through the bureaucracy of human nature. They become a freak show in a parade of presumptuous people who have already sentenced them to a life of disgrace and humiliation. So much so that even if they are acquitted of the crime or wrongdoing, they still suffer public embarrassment. A negative picture has been eternally painted on the canvas of society and the community." - Derek Kelly

This idea of innocent until proven guilty has been a centuries-old idea, with hopes that it would be engrained in the law documents in our history. Many will say it is on our Consitution, and others claim it is an integral part of due process in our constitution.

From what other historians have found, the concept of innocent until proven guilty stems from a 14th century English Parliament, who broke away from English rule citing "that an accused person must be deemed innocent until such time as his or her guilt has been proved conclusively in court." However, the first recordable evidence of their maxim in America is not found until the Supreme Court decision of 1894, Coffin vs. U.S., which reads:

"The law presumes that persons charged with crime are innocent until they are proven by competent evidence to be guilty. To the benefit of this presumption the defendants are all entitled, and this presumption stands as their sufficient protection unless it has been removed by evidence proving their guilt beyond a reasonable doubt."

Although the court refused to give this charge, it yet instructed the jury as follows:

"Before you can find anyone of the defendants guilty, you must be satisfied of his guilt, as charged in some of the counts of the indictment, beyond a reasonable doubt."

"You may find the defendants guilty on all the counts of the indictment if you are satisfied that, beyond a reasonable doubt, the evidence justifies it."

And finally, stating the matter more fully, it said:

"To justify you in returning a verdict of 'guilty,' the evidence must be of such a character as to satisfy your judgment to the exclusion of every reasonable doubt. If, therefore, you can reconcile the evidence with any reasonable hypothesis consistent.

As this has been an idea we hoped would drive the correct consequences and defense in cases, it was only necessary to presume this would be the appropriate action within a court. It took other countries and coalitions additional time to place this idea on paper and in the court of law, some all the way to the 1950s. But even if we take the United Nations enforcement in 1953 as the starting point of the "Innocent Until Proven Guilty," why are the accused still the worst human beings to walk the earth?

Step back into those shoes from above. What if it wasn't just your partner, what if it was you or your child, parent, or best friend? What if your loved one was having their life ruined, and you were party to it? Maybe, if you can free your mind to explore the possibility that the accused could be you, you would stop engaging in the life-ruining gossip of others... or maybe not. Maybe the excitement you feel in life is denying the accused of a fair trial... after all, their trial is supposed to happen in the area it was committed by a jury of their peers with the ability to have counsel. When people participate in "Guilty until Proven Innocent" rhetoric, a fair trial cannot happen.

Protecting your rights is a priority for me in your defense. Too often our clients are presumed guilty until proven innocent, as a former prosecutor, I have experienced the in's and out's of bringing justice from the states' side, however, justice isn't always served for those who are deemed criminals. I am committed to making sure you receive a fair trial, no matter the circumstances.