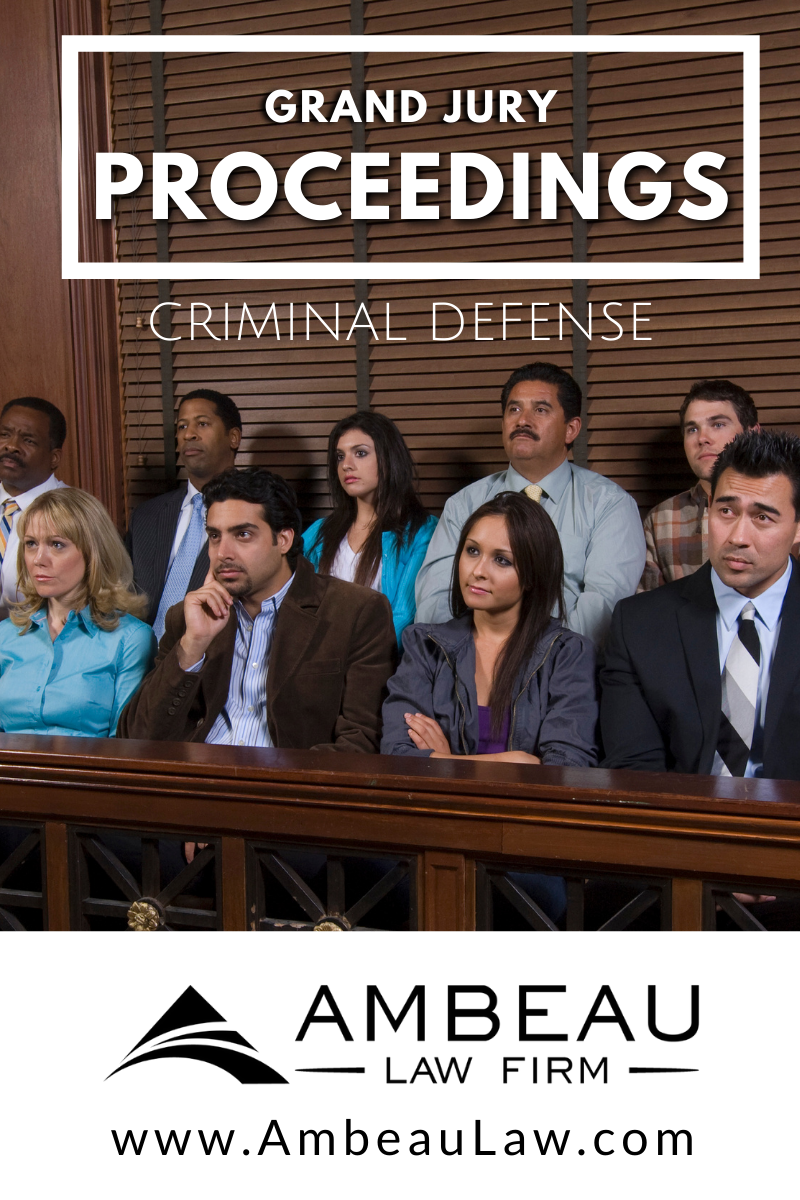 Following are the some of the statutes related to the grand jury in Louisiana. If you face a grand jury subpoena, or receive a ‘target' letter that you are a target of a grand jury proceeding, or indictment by grand jury; be sure to hire an attorney that has experience in working through this stage of the criminal justice process. You have rights, even though limited, in these proceedings, and your attorney should fight before giving up those rights.

We here at the Ambeau Law Firm would be happy to sit with you and let you know what to expect and talk about what role we play in this process. The warning above may be applicable to you in a grand jury witness subpoena as well, you must consider consulting an attorney before making a decision to talk to law enforcement.

The grand jurors shall take the following oath when impaneled:

“As members of the grand jury, do you solemnly swear or affirm that you will diligently inquire into and true presentment make of all indictable offenses triable within this parish which shall be given you in charge, or which shall otherwise come to your knowledge; that you will keep secret your own counsel and that of your fellows and of the state, and will not, except when authorized by law, disclose testimony of any witness examined before you, nor disclose anything which any grand juror may have said, or how any grand juror may have voted on any matter before you; that you will not indict any person through malice, hatred, or ill will, nor fail to indict any person through fear, favor, affection, or hope of reward or gain; but in all of your indictments you will present the truth, according to the best of your skill and understanding?”

The oath shall be read to the grand jury by the clerk, who shall then ask each juror: “Do you take this oath or affirmation?”

A. (1) Only the following persons may be present at the sessions of the grand jury:

(b) The attorney general and assistant attorneys general or any one or more of them;

(c) The witness under examination;

(d) A person sworn to record the proceedings of and the testimony given before the grand jury; and

(e) An interpreter sworn to translate the testimony of a witness who is unable to speak the English language.

(2) An attorney for a target of the grand jury's investigation may be present during the testimony of said target. The attorney shall be prohibited from objecting, addressing or arguing before the grand jury; however he may consult with his client at anytime. The court shall remove such attorney for violation of these conditions. If a witness becomes a target because of his testimony, the legal advisor to the grand jury shall inform him of his right to counsel and cease questioning until such witness has obtained counsel or voluntarily and intelligently waived his right to counsel. Any evidence or testimony obtained under the provisions of this Subparagraph from a witness who later becomes a target shall not be admissible in a proceeding against him.

B. No person, other than a grand juror, shall be present while the grand jury is deliberating and voting.

C. A person who is intentionally present at a meeting of the grand jury, except as authorized by Paragraph A of this article, shall be in constructive contempt of court.

C. Any person who violates the provisions of this article shall be in constructive contempt of court.

A. Notwithstanding the provisions of Article 434, the state may disclose to state or federal prosecutors or law enforcement officers, or to investigators on the staff of the district attorney or attorney general, or to expert witnesses, information and documents provided to a grand jury. Any person to whom such disclosure is made shall not engage in further disclosure of the material and shall use the disclosed material solely for purposes of investigation of criminal offenses and enforcement of criminal laws.

C. The district attorney may also disclose to a witness at trial, including the defendant if the defendant testifies, any statement of the witness before the grand jury that is inconsistent with the testimony of that witness.

La. C.Cr.P. art. 439 – Subpoena of witnesses to appear before the grand jury

A. In the case of any individual who has been or may be called to testify or provide other information at any proceeding before or ancillary to a grand jury of the state, at any proceeding before a court of this state, or in response to any subpoena by the attorney general or district attorney, the judicial district court of the district in which the proceeding is or may be held shall issue, in accordance with Subsection B of this article, upon the request of the attorney general together with the district attorney for such district, an order requiring such individual to give testimony or provide other information which he refuses to give or provide on the basis of his privilege against self-incrimination, such order to become effective as provided in Subsection C of this article.

B. The attorney general together with the district attorney may request an order under Subsection A of this article when in his judgment

(1) the testimony or other information from such individual may be necessary to the public interest; and

(2) such individual has refused or is likely to refuse to testify or provide other information on the basis of his privilege against self incrimination.

C. The witness may not refuse to comply with the order on the basis of his privilege against self incrimination, but no testimony or other information compelled under the order, or any information directly or indirectly derived from such testimony or other information, may be used against the witness in any criminal case, except a prosecution for perjury, giving a false statement or otherwise failing to comply with the order.

D. Whoever refuses to comply with an order as hereinabove provided shall be adjudged in contempt of court and punished as provided by law.

A grand jury shall hear all evidence presented by the district attorney. It may hear evidence for the defendant, but is under no duty to do so.

When the grand jury has reason to believe that other available evidence will explain the charge, it should order the evidence produced.

IMPORTANT: This is not legal advice. I have provided this in an effort to inform you of what to expect, not to advise you on a course of action. Please consult with an attorney before making any decision that may affect your legal rights, liberty, freedom, or safety.